The Nissan Leaf is an electronic battery, five door hatchback car. Which was listed as the world’s all time top selling plug-in electric vehicle back in December 2019, it was only beaten later by Tesla in the following January.

The Leaf has an improving charge range, which has improved over the course of its release, rising from 73miles per full charge to 226miles, due to a wide set of improvements by the manufacturers. 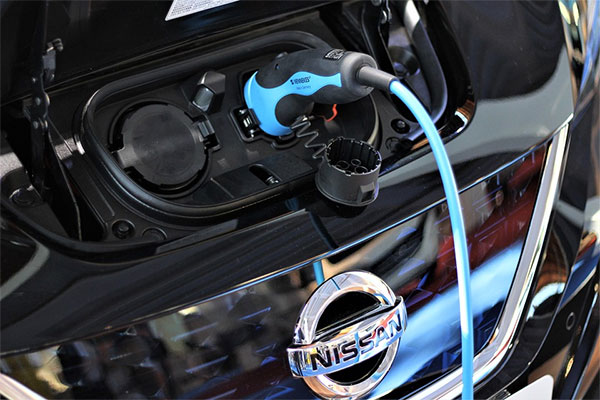 The vehicle is economical and environmentally friendly, and during a study in 2014, it was found that the impact of this car was exceptional.

As in the USA alone, owners of this car would collectively drive around 625 miles, which, in a normal gas powered car, would translate to 180 million kilograms of carbon dioxide.

So not only is it economical in power consumption and use but it is also vastly reducing the concentration of carbon dioxide put out into the atmosphere.

Although should a person consider buying the Nissan Leaf, they should remember that with this being an electric car, it would require off-street parking or a safe space for overnight charging.

Should you not decide on this, then you would be reliant on a public charging station, which although is achievable, is not always convenient and may not suit everyone’s lifestyles.

The Nissan Leaf is equipped with different charging capabilities as many electric vehicles may be. It uses two types of charging stations for its inlets, these include, Type 2 and CHAdeMO.

Type two is probably much more common, especially for home use. It is used for both home and public stations for both slow or fast AC points.

Whereas CHAdeMO is used for carrying high power during rapid DC charging, using a relevant connector. The inlets for these charging stations are found behind a flap in the car, where you would usually find the car's grille.

The Nissan Leaf can be charged slow, fast, or rapidly from any public charging unit, though it depends on the public unit's charges, network, and the specific charge unit type.

Be aware of the cables you use to charge also, slow charging will use a 3-pin type 2 cable, fast will use a type 2 into a type two connection, which is supplied with the car under the aforementioned flap.

If you wish to use rapid/ CHAdeMO, the CHAdeMO connector is tethered to the charging unit.

So, how long does it take to charge? This car can travel many miles on a full charge and has options of how to reach that full charge if you have plenty of time, a few hours, or need a charge pronto.

But, exactly how fast is it to charge up? If you stop at a charging station, will you have time to get lunch while it charges? The answer? Yes.

If you want to reach exactly 100% full charge, it is recommended that you use slow or fast charges.

While rapid will charge your car up faster, it will also usually charge to 80%, as it will reduce or cut the power before it reaches full charge to protect your car's battery and to maintain maximum efficiency.

When considering charging times, they are seen more like guidelines, as it is very, very rare you will ever have to charge your car from 0%.

Although that being said, there are some factors that can alter the charge time. Things like ambient temperature, in-vehicle energy loads, and the occurrence of energy rates slowing down as the maximum charge nears.

The average charging numbers are all dependent on your choices and on the capabilities of the chargers.

This car in particular is usually fitted with a 6.6kW on-board type 2 charger, so in this case, your fast charge may take a little longer, but that is also dependent on how much energy your battery has when you charge it.

It also has a 50kW DC capability, so based on this, your rapid charge, even from 0% should not be much more than 40 minutes.

How do I know exactly what charge I will get?

A large part of what you can expect from your charge is down to the connection you have with the charger.

There are upgrade options that will give you more charge faster, but this usually costs more, however, if you buy a used Nissan Leaf, it may already have some upgrades. Be sure to check.

When you buy your Nissan Leaf, check the connection it has and decide if you want to upgrade, a level one charge will give you 5 miles per hour of charge, as this may be useful for home use, you may want to upgrade if you are likely to be using your car for distance or use it often with little stationary time in between.

The cost to charge your Nissan Leaf varies by state. In the USA the average is about $5.39 for a full charge.

In comparison to gas prices, even the most expensive rates for electric cars are low. So it is definitely worth considering an electric car, and the money you save can be used to upgrade your charge for a faster connection.