The Chevrolet Volt was a range of electric cars manufactured by General Motors and was first released in 2011.

The concept of the Chevy volt was the first-ever plug-in hybrid car to be shown by major car manufacturers.

The plug-in hybrids contain a gas engine and an electric motor which is rechargeable from home or public charging points and can also run on gas when it reaches the battery capacity threshold.

The Chevy Volt was discontinued in early 2019 but still continues to be a powerhouse in the electric car industry.

Electric and hybrid cars are so common nowadays that a lot of people have charging stations built into their homes to make it so convenient to charge the battery whilst going around their day to day business at home.

The US has over 25,000 public charging stations across the nation, most of which are based in the state of California.

The Chevrolet Volt has a 420-mile range when it is fully charged and combined with electric and gas power.

It will also average just over 1000 miles between filling up on gas if you charge your chevy regularly. Most users have commented that they only need to fill up on gas every few months. 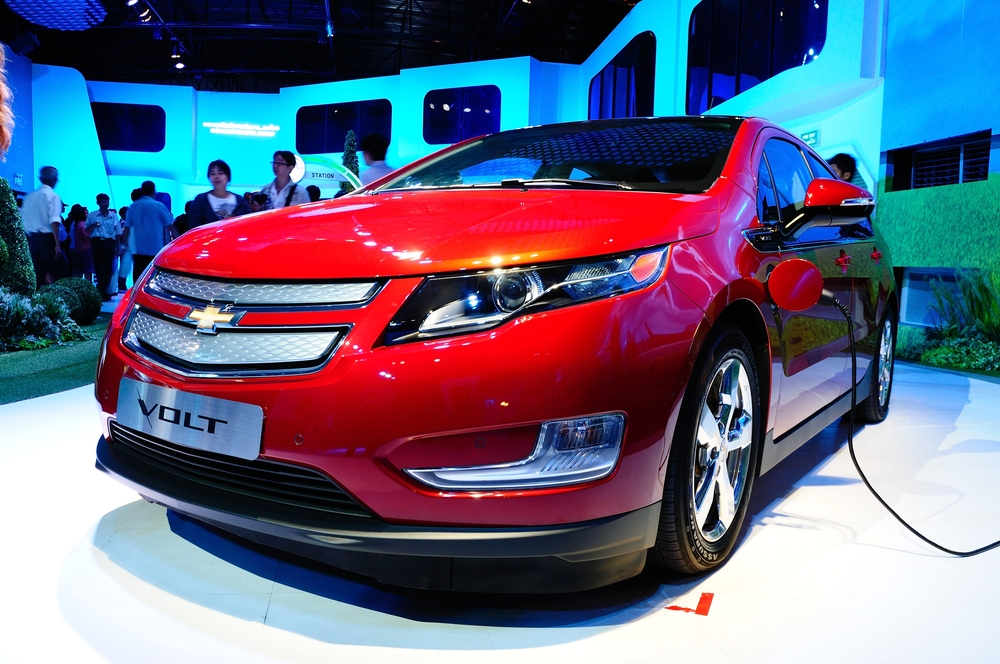 How long does it take to charge?

Level 1 Charger: You can charge your chevy hybrid at home using the standard Level 1 120-volt portable charging cable that comes with the car which can be plugged into a 3-prong wall outlet.

It has a charging speed of about 4 miles per hour and will take just over 12 hours to fully charge.

If you are out working all day, then the best time to charge would be overnight so it’ll be ready in the morning for you when you leave for work again.

Level 1 charging provides the slowest charge out of all the chargers.

Level 2 Charger: You can even upgrade to an AeroVironment Level 2, 32 amp EVSE-RS charging unit and charge your Chevy volt up to 2.5 faster than most traditional units.

The 240-volt charger has a charging speed of 22 miles per hour and can fully charge your hybrid within 4.5 hours.

You can find most Level 2 charging ports around retail parks, workplaces, and dining areas and are ideal to park up, start charging and go around your business whilst you wait, it feels so much more convenient than having to stand with your car like you would at a gas station all the time.

If you’re often someone who’s rushing around and has no patience, then investing in a 240-volt charger for your own home will be beneficial for you as it’ll cut your charging time dramatically.

The Chevy Volt doesn’t offer DC charging or more commonly known as fast charging because the car can switch from the electric battery to the gas engine when the battery is too low.

DC chargers use a high-power direct current instead of alternating current found in households. They do however offer the highest charging speed.

They are most commonly found in public charging stations and are mainly used for long-distance drivers. They are extremely expensive to install into your own home.

By general rule of thumb, the lower your electric battery then the longer it will take to charge. If your battery is too low, it’ll switch to the gas seamlessly instead of just completely dying like a traditional gas car.

Some people even made the vouch for faster-charging ports to be made, however, regardless of what the electrical item is, increasing charging speed can dramatically reduce battery life in the long run and can even cause the car (or item) to catch on fire.

How much will it cost you?

If you’re charging your car at home, the price will depend on your particular electricity rate and also how much you drive and the amount of miles you do every day.

It may sometimes feel like you’re charging your Chevy Volt a lot, but the price of electric charging at home and in public is a fraction of the price of filling up on gas every other day.

A lot of businesses around the US will offer free charging as an enticement to come into their store or restaurant. You can check the prices of public charging stations by using the ChargePoint app.

However, charging in public will cost you more than charging at home. You can even be charged a fee if you leave your hybrid plugged into the charger after it is fully charged, so make sure when it hits full you remove it as soon as possible.

Some public charging stations make you pay per minute instead of paying per kWh charged and once your battery starts to get full, it’ll start to charge slower and then charge you more.

We’d recommend you just charging what you need in order to not pay over the top and just charge when you get home.